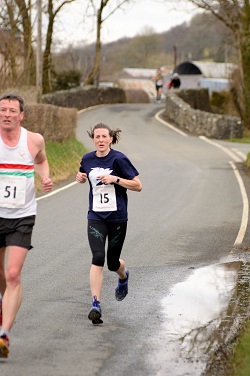 Friday 25th May was a day of temperamental showers and gloomy winds, that was until 6pm and the race preparations, warm ups and registration started for the annual Ras Y Llychau began. Sarn Helen member and event organiser David Thomas always seems to please the weather gods and year after year glorious weather is a given; the skies cleared and the roads dried up just in time for the fiercely fast and competitive kids race to start.

The junior competition was dominated by young Carmarthen Harrier athletes as the top six runners were all members with superb times. The one-mile course is out and back along a small B road so runners find themselves pushed to their limits, knowing who is close behind or just ahead. With a slight downhill finish there is everything to fight for and the winning times were some of the fastest seen.

A Huge field of 134 runners took part in the 5k circular route, which apparently boasts pretty and majestic views, something that the hardened and determined athletic will certainly have failed to take advantage of with sweat in their eyes and their clock watching. First to finish was a Llanelli AC runner with a fair lead and a strong finish. David Keenan placed 1st Open male as the race winner in 17:29. 2nd in the OM class was Matt Yelland of Amman Valley Harriers in 18:37 and Sarn Helen’s Tom Willoughby placed 3rd on 18:42.

The ladies race was won an in impressive time of 19:59 with Wendy Price of Carmarthen Harries placing 20th overall, 1st F35. The whole F35 field was made up of strong runners and good times with 2nd going to Amman Valleys Clara Davies in 20:53 and 3rd to Sarns Eleri Rivers in 22:48.

Not much separated the F45 class with Amman Valleys Donn Morgan running 23:41, Delyth Crimes of Sarn Helen 2nd in 24:42 and her sister Enfys Needham Jones also Sarn Helen crossing the line 25:26.
The winning lady of the F55 class, the outstanding Lindy Eynon of TROTS, ran a time to better all the ladies 10 years her junior as she ran a time of 22:42 and took home the win. 2nd and 3rd place went to Nanette John in 27:47 and Brecon Tri runner Kate Hovers in 28:03.

The ladies competition for under 18’s is great for promoting athletics and sport in an age class that is hard to motivate. Another win for Carmarthen Harriers as Cerys Davies placed 1st in 24:12 while SArn Helen clinched 2nd and 3rd as Violett Caulkett placed 2nd in 25:53 and Gwenllian Llwyd 3rd in 27:49.
The under 18’s male class was won by 15-year-old Archi Morgan, Carms Harriers, who placed 4th overall in 18:36. His team mate Scott Price was hot on his heels and placed 2nd in 18:57 with Sarns Aled Sion Jones 3rd and just a stones throw away in 19:05.

There were no surprises in the Male 60 class as the Top British ranking Richard Marks, at 68 years old, ran a time of 20:49 while his team companion and rival of the night Murray Kisbee ran 22:41. TROTS runner Keith Powell placed a strong 3rd in 24:18.

Another competitive race was witnessed between the M50 runners and Glyn Price of Sarn placed on top in 18:45. Pete Walters of TROTS ran into 2nd place in 22:30 and home grown David Thomas was overjoyed to place 3rd in 23:16.
Not even a minute separated the M40 class with the Amman Valley Harrier who placed 2nd overall taking home the gold. Nick Griffiths ran 18:16 with Neath Harrier Gareth Davey hunting him down and finishing in 18:27. Mick Davies of Sarn Helen placed 3rd in 19:23, a fantastic 20 second improvement on last years time.

A hugely popular event due to its family friendly reputation, local support and accurate, unchanging course the races attract huge numbers and some exceptional talents. This year was no exception although the seemingly impossible race records are safe for another year. In the 5k adults race Swansea Harrier Lewys Hobbs ran 15:50 in 2003 and in 2011 Amman Valley’s Jade Griffiths ran 18:32.