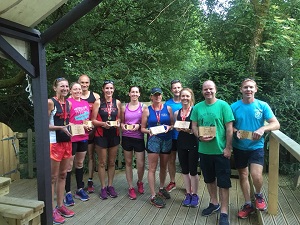 A succession of successful races for Team Sarn Helen over June and July has resulted in some big personal bests, top class places and even some outright wins. Our Ironman extraordinaire, Gareth Hodgson has epitomised these three points whilst competing at three separate events across the UK.

The Grafman Middle Distance Triathlon on 20th May covered roads through the heart of Cambridgeshire and Hodgson’s splits- Swim : 26:57, Bike : 2:19, Run : 1:19:44, led to a fantastic win. Coming out of the water onto the bike leg in 9th place Hodgson really found his rhythm as the cycle is where Hodgson is feared and can really make the difference. Off the saddle in 2nd place he still had his work cut out and even passing the leader at mile 3.5 the win wasn’t secured. Cramp and the need to stretch put him back into second so it was pure, dog eared determination that led him to regain the lead at mile 7.5 and clinch a big title win.

The Cotswolds 113 on June 10th took place from Ashton Keynes Water Park, a location well received by athletes and spectators due to the immense heat. Another Middle Distance event, Hodgson seems to have identified a forte seeing that his overall time of 4:01:04 proved a massive 6 minute PB although much less of the excitement/uncertainty of the previous event was witnessed. His splits - Swim: 26:15, Bike : 2:09:34, Run 1:21:55 were enough to secure a 9 minute lead of 2nd place as he led from bike stage, mile 2, clinching another outright win.

In an event of a different league, Ironman 70.3 Scotland on July 1st, Hodgson found himself against the fierce competition of professional Triathletes. The Half Ironman event was held from the spectacular Holyroad Park in Edinburgh and Hodgson’ performance here is without a doubt on of his biggest achievements to date.
The tough, hilly course suited training terrain, the hills deep valleys of West Wales and after a strong swim it was again his bike stage that proved his talent. As he worked up through the field he passed several professional athletes, despite their 10minute head start on the standard age groupers and a consistent, solid run placed him an incredible 14th overall and 1st in his class. Race splits- Swim : 30:39, Bike : 2:28:25, Run : 1:29:07.

Two outright wins and a top category place against world class athletes ins a sure sign of hard work paying off and a bright future to come.

A superbly well organised, well attended, well known and competitive event, the Welsh Castles Relay is a highlight of the Sarn Helen year and this year took place on June 9th and 10th. The two-day event covers 208 miles from Caernarfon Castle in the Northest of Wales to Cardiff Castle, where the finale is grand and gratifying for all. With 20 legs to cover the massive distance 20 athletes take part in the race itself although the whole club deserve recognition for their support, their dedication and for many their logistical abilities.

Worked against an accumulative time this years results are our best ever and will be something to remember; our exceptionally small club placed an outstanding 9th overall (just 2 mins behind Sale Harriers) and were the 5th fastest welsh team. With competition from 69 clubs, some as far travelled London and Brittany, where membership is in their thousands, compared to out half a hundred, it really does demonstrate a talent rich and supportive team environment. Captained this year by Sian Roberts-Jones and Simon Hall, the clubs time of 22hours and 51 minutes reflects each mile of the journey being ran in less that 7 minutes; an extraordinary performance, and one that would not have been possible without the co-ordination and direction of our Castles Relay managers, Lyn and Eileen Rees.

Caryl Wyn Davies has produced another outstanding, top place result at Sospan 10k which was held on June 23rd and was attended by both Caryl and her betrothed, Aberystwyth AC’s Gary Wyn Davies. The event is well organised the Llanelli based club Sospan Road Runners and makes the most of the scenic Millennium Coastal Path, allowing for a fast route that loops back on itself, and where competition is fierce. Davies ran a time of 42:57 placing herself 2nd lady overall whilst Gary ran 37:17, finishing 3rd overall and 2nd in his age class.

The following day, Sunday 24th June, saw a team of Sarn Helen runners attend another big race at another renowned welsh venue as 10 members took part in the popular JCP Solicitors Half Marathon in Swansea City. The day was described as ‘Hot, Hot, Hot!’ which resulted in compromised times and utter exhaustion in many. Our club faired well with some fantastic positions and with another great result Kenneth Caulkett was our first runner home in 1:20:42. George Eadon gave a great performance which resulted in a near PB time of 1:32:01 while David Thomas places higher and runs faster with every race; he finished in 1:48:16. Our first female to cross the line was the talented and determined Delyth Crimes in a time of 1:53:27, totally unaware that her stripped vest was being hunted down by team mate Martin Darby who finished close behind I:54:21. An even closer call was between a new club member, Matthew Walker, donning his Sarn vest for the first time, and distance lover Jenny Caulkett; they finished in 2:04:18 and 2:04:40 respectively. Nicola Davies and Emma Gray work well off each other both in training and on race day, a situation which lent itself well to the days results as they both ran fab times of 2:33:09 and 2:38:17. Back to the running circuit it was great to see Emma Davies cross the line with a smile and a sigh of relief in 2:53:52, despite de-hydration and discontent on the course.

A popular mid-week race is the Abercych 10k road race, organised by Clwb Rhedeg Newcastle Emlyn, was held on Thursday 28th June and was won outright by aspiring athlete and Triathlon loving John Collier. Having a strong run despite exhaustion due to constant house reservations, Ken Caulkett placed a fantastic 2nd in thirty-seven minutes dead. Carwyn Davies is showing great return to form after a dreaded achilles injury and placed 4th overall and 1st M40 in 40:53. Placing 2nd M50 in a competitive veteran field David Thomas ran a time of 47:10. Jenny Caulkett, our one brave lady representative smashed under the hour mark on a particularly hilly course to finish in 58:36.

Birmingham and Black Country Half Marathon

A lone Sarn Helen runner made the journey to Wolverhampton to take part in the 2018 BBCHM. This race is slightly unusual in that it operates in a time trial format with runners leaving the start in Wolverhampton in groups of 5 or 6. Runners then follow the canal for some 13.4 miles, through tunnels, over locks and bridges before finishing in Birmingham, near the Sea Life Centre. Martin Darby returned this year to claim his deferred entry from 2017 when he had to cancel his plans last minute as his wife went into labour. Martin managed a very respectable time of 1:59:37 in such hot conditions which we are just not used to in the UK.

Sunday July 8th was one of the hottest days of the year and it was also the day of the Amman Valley Harriers organised Ammanford 10k Road Race. 300 runners lined up at the Rugby Club in Ammanford for the race, among them were 4 Sarn Helen runners, Sion Price, George Eadon, Caryl Wyn Davies and David Thomas. The event usually attracts a strong field of runners, and even more so this year as it was a qualifying round of the West Wales Road Race Championships. This race is one of two halves, the first a gradual climb all the way to 5k on exposed main roads. Sion made a very strong start and committed to a fast pace on the climb, hoping to capitalise on the shady descents that can be found in the second half. Unfortunately Sion struggled to hold the pace and slipped to 5th place in a time which most competent runners could only dream of, 35:20, 1 minute 49 seconds behind first place. George had a strong race, finishing 38th in 42:04, just ahead of Caryl, completing the course in 43:10 who claimed a championship Silver medal in her category. David too had a great race and finished in a very respectable time of 48:52. Having compared the results to previous years, it’s obvious to see that the heat was reflected in everyone’s times.