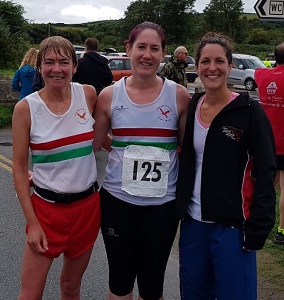 A total 33 runners took part in this year's Caio-Llanwrda race organised by Eirian Ad-clad Davies on Friday 27th July. It was the "easy" version this year starting in the small village of Caio and ending in Llanwrda. The race was won by Sarn Helen's Carwyn Davies in a time of 54.14, but he was pushed all the way by Llandovery's Wendy Price who finished just 4 seconds behind him! Calvin Williams was 4th veteran male across the line on a time of 66.06, and Carol Rees ran a great race to finish as 2nd veteran female in a time of 76.26. Eirian Davies himself finished in 89 mins and Sarn lady Emma Davies crossed the line in 1hour 47.

Sun, sea, and sand provide the backdrop to the Brecon Carreg Barry Island 10K which boasts it brings a summertime festival of running to the popular seaside resort with a 10K race and family fun run. Held on Sunday 5th August Sarn Helen had 3 representatives on the start line and the route, which is fully hosted on closed roads, met our runners needs and provided great conditions for great times. Sion Price, on his way back from injury, is chooseing his races wisely and placed a fantastic 12th overall on the day; 8th in his class with a time of 34:50. Ken Caulkett continued his brilliant representation of the club with another top time; 6th in his class with a time of 36:32. Jenny Caulkett, not to be outshone by her husband, ran a strong time of 57:57.

On August 12th Aberystwyth AC held their annual Borth Beach 10K. Four Club runners competed in the 10K with all of them placing the top 15 out of 138 runners. Youngsters Tomos Morgans and Aled Sion Jones placed 1st and 2nd in the MU20 category with Morgans running in 39.45 and Jones running in 40.19. Caryl Davies (the only female from Sarn Helen on the day) run the course in 42.35 placing first Female (adding another title to many during 2018). Lastly Mike Davies “The Little Legend” running in 40.27. Their overall placings are as follows:- Tomos-5th, Aled-9th, Mike-11th and Caryl-15th.

An event of in only its second year, and one that had to content with a morning of staggeringly tragic weather, The Cippyn Run was held from Poppit Sands on Sunday 12th August, hosted and organised by Rhys Harries Fitness Coaching. The event boasts three distances and Sarn Helen were represented by a strong, female only team in the 7.5 mile and Half Marathon races. Being advertised as a challenging, hilly race does not do the route justice, as all runners climb a total of 1,000ft within the first 5 miles and for the half marathoners they slide down and back up again before they reach the final 2 miles descent and cross the finish-line. Relishing the climbs, it was Dee Jolly who placed first overall, an impressive feat considering the competition, in the 7.5 mile race in a particularly impressive time of 53:33. Meanwhile Dawn Kenwright placed 1st veteran lady in the Half Marathon in 1:57:11 and Pamela Carter, smashing her last years’ time by close to 5 mins, finishing in 2:11:18.

Saturday 18th August marked the second running of Ras y Dewin, a 4.7 mile fell race organised by Sarn Helen's Carwyn Davies that formed a part of the Cwrt y Cadno Show programme. As with all fell races the main feature of the race is the ascent and descent of a good hill, and in this case, it provided a challenging total elevation gain of 870 feet.
A small gathering of 18 runners made up largely of enthusiastic local amateur runners and Sarn Helen Club’s faithful runners left the show field at the start of the race and quickly found themselves attacking the first 2 miles of unrelenting climb.

At the top of the climb, shrouded in hill fog, three runners; Dee Jolly, Nigel Davies and Geraint Evans emerged with a clear lead on the chasing pack. They continued to exchange lead position until the descent where Sarn Helen Club mates Jolly and Davies established a race winning gap over Evans on the steep downhill section to the valley floor. Davies was first to reach the river crossing with just a quarter of a mile to run but Jolly proved to be the more able on the scramble up the river bank on the other side. It was the final 100 metres back to the show field finish line that gave rise to an entertaining sprint finish that decided the race winner by the smallest of margins as Davies finished in a time of 39:40 followed by Jolly in 39:41, who had the honour of being first lady as well as second overall, and taking third in 40:17 was Evans.

A prize for first local was awarded to Mathew Hand in a time of 44:18.

Sarn Helen runners were pleased to see the return of Lyn Rees, who has not donned a club vest for many years after persistent injuries which had prevented him running, participating in the friendly event.
Other Sarn Helen Club results were as follows: Tony Hall 44:26, Calvin Williams 48:50, Lyn Rees 59:36, Jane Holmes and Emma Davies 74:21
Sunday 19th August saw the dawn of the annual TROTS 10k in St Clears the ever present and consistent Caulkett family made the start line. As with all local 10k road races a flat and fast course is near impossible but his event, along with its large competitive entry of runners, is known to bring out some great times. Amongst 166 runners Ken finished in 37:07 and 3rd overall whilst Jenny knocked half a minute off her previous 10k race time with 57:28. Carwyn Thomas put on his racing shoes for the first time this year and ran 45:24.

The Poppit 5k Race Series ran through July and August with the finale being held, in some surprisingly splendid conditions, on Tuesday evening, Aug 14th. Sarn Helen took some amazing category prizes both in the individual races and throughout the series, including outright wins and correlative point titles, within the junior and senior league.

Junior member Rhys Williams won all three races outright claiming gold on each evening and, for the third year running, won the junior race series by a mile (well almost!). His times progressed with time and his 3rd event was his fastest in a staggering time of 8:02. Alaw Jones also claimed the series win after competing at all three events. She placed 2nd in the first two races but capped out in the third event where she ran her fastest time of 9:30. Also placed on the series podium was Jac Rees who won 2nd Junior Boy and PB’d on the final night with a time of 10:53 and Nia Williams won Bronze in the Junior Girl class, a greatly deserved title as she knocked up a massive PB of 10:59 at the final meet.

The events always attract large crowds of runners in both the races and Sarn Helen got off to a flying start as Dylan Lewis clinched an outright win at the first event; the night we were best represented, in a time of 17:28. Other best times recorded that night for Sarn Helen are, Tom Willoughby 19:48, David Thomas 23:54 and Sian Roberts-Jones 24:09. Carol Rees and Liz Pugh scores their best times along the unforgiving sand dunes on the 2nd evening, Rees ran 27:13 and Pugh 28:12.

Husband and wife team, Eleri and Mark Rivers, ran all three events and for the second year running both claimed gold for their respective categories. Mark ran a PB time on the final night with an impressive 19:29 whilst Eleri averaged a time of 23:29 though the three events.

A fantastic fundraising event was held on Sunday 22nd of July from Lampeter Leisure Centre; the Lampeter Tenovus 5k. The great team of organisers includes the husband and wife team at Onelineraceresults.org and local lady extraordinaire, long standing Sarn member, Lampeter Couch25k founder and pretty darn impressive runner Helen Willoughby. The event, which included the likes of cake stalls and tombola as well as a fast and accurate 5km course and various children’s races, was again a massive success and raised over £650 for the local branch of Tenovus.
Near to a total of 100 competitors took part on the day with Abbie Green and Gruffydd Roderick first to finish the under 8’s one lap run and Casi Gregson and Charlie Price were first girl and boy to finish the two lap run. In the 5k main event the first runners home were as follows- Rob Davies Amman Valley Runners 16:54, Kenneth Caulkett of Sarn Helen 17:17, Mark Horsman of Cardigan Running Club 17:33; Wendy Price of Carmarthen Harriers 20:22, Eleri Rivers of Sarn Helen 22:03, Dee Jolly of Sarn Helen 22:43.