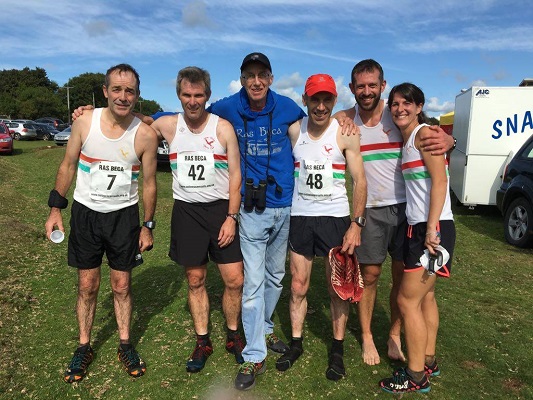 Saturday 25th August can mean only one thing... Its Ras Beca day. A fantastically popular event for many a Sarn Helen runner there is no other race like it. Along the peaks of the Preseli Mountains the 5mile route encompasses bog, mountains, rocky climbs, a considerable amount of mud, and more bog. 8 Sarn Helen lined up for the start gun but only 7 runners finished as the youngest club member present, Tomos Morgans, made off to a good start but badly sprained his ankle half way through.

Running hard from the offset and with a reputation as strong as his win list it was no surprise that Sarns Felipe Jones placed 1st overall in 37:20. The ladies race was also won by one of our own as Dee Jolly took the title for the 3rd time with a time of 44:45. Glyn Price won the M50 class and placed 3rd overall in 40:57. Simon Hall ran 43:08 winning bronze in the open male class. In attendance every year both Calvin Williams and Huw Price ran well through the bog and reeds with times of 52:46 and 1:00:14. Pleased to be again darning the Sarn Helen colours and famous red shorts Lyn Rees ran the terrain he loves best and finished in 1:07:58.

Sarn Helen were exceptionally well represented on Sunday 2nd September at a number of races. In Newcastle Emlyn a new 10mile road race we held over some surprisingly hilly small roads. Organised by Emlyn Runners the event was a big success and Sarn Helens local hero Jane Holmes ran a great time of 2:08:40.

We had 4 representatives in the bigger stage of Cardiff 10k with our two ladies scoring significant PBs. Longstanding and experienced distance runner Caryl Wyn Davies beat her previous best by a considerable 50seconds with a time of 40:33; Liz Pugh, newer to the race scene but ready for any challenge, ran her best time in 56:44. Team mates and work Colleagues George Eadon and Martin Darby ran strong races and enjoyed the crowds, they finished in 41:47 and 51:16 respectively.

One of our veteran affiliates, Graham ‘Inky’ Penn travelled further afield to race around his old stomping ground. Competing alongside previous teammates he ran the Dunstable Downs Half Marathon, a hilly multi-terrain event, which he finished just before the midday heat came to full force.

Once again taking the striped Sarn Vest across the counties Penn competed in the Paras 10 on Sunday 16th September. Hosted by the Parachute regiment over the training grounds at Catterick Camp in north Yorkshire he ran the 10mile distance in combat boots and trousers; he finished in 2:06:35.

Coed Y Brenin, nr Dolgellau, is growing in popularity with both cyclists and runners and new events are being added to the calendar each year. On Sunday 9th September their 10k trail race was held and our veteran trail lover and Welsh Capped lady legend was on the start line. Adding to a long list of age category achievements this year Dawn Kenwright placed 8th female overall and 1st F60 in 56 minutes. Dylan Lewis also presented on the start line and made a strong move into 1st position overall at mile 2. Feeling strong he pushed on to make a gap but unfortunately the finish line alluded him. Lewis’s final result was one of DNF as a calf strain bade him pull out.

The Lake Vyrnwy half marathon is a firm favourite for those seeking a Personal Best over 13.1 miles, with its relatively flat and fast course taking runners on the roads around the very scenic lake Vyrnwy and was perhaps the reason why a large contingent of fifteen Sarn Helen runners took the journey north to Llanwddyn, nr Llanfyllin on a rainy Sunday morning; September 9th, with great expectation.
A field of almost 1400 runners left the start in the village boosted by the support of local villagers who had turned out in force despite the persistent rainfall, conditions for the runners were on the other hand favourable with seven of the Sarn Helen runners recording well earned PB's.

Blustery wet conditions greeted some 3400 runners for the Admiral Swansea Bay 10K held on Sunday September 16th, the flat and fast course often attracts elite roadrunners from across the UK and further afield and has recorded some very fast times over the years.

Sion Price produced a spirited run in a strong field despite being plagued with injuries on the run up to the race and suffering with Tonsillitis finishing in 34:22 and 15th place, husband and wife Ken and Jenny Caulkett also tackled the route with Ken running hard to finish in 36:51 and a very respectable 52nd place to support his wife Jenny finishing in 52:29 979th.

Calon Tysul is an organisation growing in strength and support and over the weekend of September 22nd and 23rd held a number of multi discipline events for children and adults of all abilities. Superbly organised and held from Llandysul Swimming Pool Sarn Helen had representatives in both the junior and adult events. In Saturdays ‘Trostar’ aquathon the distances were a challenge for all but our two juniors took in their stride (and flippers). Alex Brown and Elin Onwy completed a tough 50 meter swim followed by a 400m run.

In the adults Triathlon event we had three strong women on the scene, Pamela Carter, Emma Gray and Enfys Needham-Jones. Their competition was known as a sprint tri, but by no means does this make the effort involved any less. They covered a 200m swim followed by 10k on the bike and topped with a strong 2.5km run.

With the end to the busy spring/summer race season in sight only a few half marathons are left on the welsh race calendar but it would seem that Sarn Helen are determined to shine at them all. On Sunday 30th September the renowned Caulkett family travelled to Pembrokeshire and took part in the long-standing Dale Half Marathon, organised by Pembs Tri and supported by the family team of Onlineraceresults.org. Pleased with a top 10 place and the feeling of a strong race back in his legs after a lengthy injury Ken Caulkett placed 7th overall in a time of 1:24:40. Jenny Caulkett also placed high in the female veteran class and covered the hilly road miles in 2:24:31.