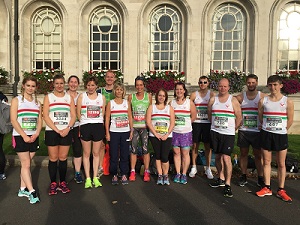 September 7th 2018 marked the 15th running of the Cardiff Half Marathon which has now become the second largest half marathon in the UK behind the great North Run. This year it also hosted the inaugural Commonwealth Half Marathon Championship, which attracted international athletes from across the globe.

Sarn Helen were well represented with 22 club members toeing the line, and it was Dawn Kenwright that brought great pride to the club by winning her F60 category by over a minute in an incredible time of 1:41:45, in doing so adding to her long list of running achievements, in one of the UK's largest events.

As mentioned George Eadon and Martin Darby took it upon themselves to complete not just one but two massive half marathon events in just two days with Bangor half marathon on Saturday, 6th Oct, and Cardiff half on the Sunday. The Bangor race starts and finishes in the city centre and goes out to the coastline, in to the magnificent Penrhyn Castle Estate then back to and along the Garth Pier over the Menai Straits, taking in views of Anglesey, Snowdonia and the surrounding North Wales coastline. Fully prepared for the challenge still to come the boys raced comfortably under the coveted two hours and crossed the line together in 1:55:44