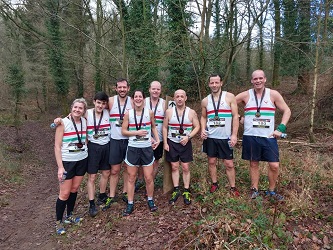 An all around fantastic event was held in Aberystwyth on December 9th where Sarn Helen Running Club were well represented at the annual Cambrian News 10k. Conditions were exceptionally cold and the icy wind saw runners pacing hard for PBs and catiogry positions. As well as being well represented the club members also ran great individual results and times;

Dylan Lewis was 1st Sarn to finish, 4th overall (by a 2 second margin) in 35:12/ Ken Caulkett placed 10th overall in 36:12, Glyn Price claimed Silver in the M50 class in 38:34, George Eadon ran a large PB time of 39:07, Mike Davies placed 4th M40 in 39:23 and Tomos Morgans placed 2th youth in 40:59. Eilir Evans ran a strong 41:41 while Caryl Wyn Davies placed 5th female, 3rd in her class in 42:03. Veteran female Eleri Rivers also placed 3rd in her class with a PB time of 44:31, Michael Taylor placed 5th in the M50 class in 45:05 while veteran phenomenon Tony Hall won the M60 class in 45:16. Mitchell Readwin ran a time of 46:20 with Donna Davies next to finish in 48:30; Delyth Crimes placed 3rd F 50 in 48:43 while Matthew Walker gets quicker with each appearance, running 48:50. Pamela Carter ran well with a time of 52:35 with Jenny Caulkett close behind in 53:50, Placing 7th in the F55 class Nanette John ran a time of 56:53 and Nicola Davies is making a firm return to fitness in 56:53. Liz Pugh fought hard against the wind to cross the line in 58:20 while a 1st time Sarn representative Rebecca Doswell smashed under the hour in 59:52. Sandra Dabner was another lady making her first Sarn Helen appearance and finishing in 1:01:01, Graham Penn placed well in his class as he crossed the line in 1:01:42 and clocking 3 team mates within a minute Jane Holmes finished in 1:01:52. Pleased to finish a challenging race in 68:55 symptom free was Emma Gray.
The club vest was present on the start line of two events held Boxing day, what better way to begin working off the excesses of Christmas. In Glynneath 5mile road race, known to be a fast and flat course which some big numbers, was long time Sarn runner David Thomas who ran a time of 36:29.

In a smaller field, the the course is known as a hilly slog but where the atmosphere and comradery is never amiss, Sarn Helen had 6 runners in attendance at the Crymych 6-mile Boxing day race. The race was won in a staggering time of 32:41 by Jack Turner while local legendary lady, GB representative Caryl Jones placed 2nd in a massive female course record in 34:11. To run that time Jones was clocking an average of 5 minutes 42 seconds a mile!
The battle continues between team mates Simon Hall and Glyn Price, this time with Price coming out on top by a mere 6 seconds. He claimed 1st M50 in 37:30 while Hall placed 3rd Open male in 37:36. Dee Jolly was next Sarn to finish in a massive PB time of 40:11, placing 2nd lady and running 43:28 Huw Price also ran a category podium race as 3rd M50. Tony Hall claimed gold again in the M60 class in 44:17 with Mitchell Readwin running the same time, within just 8 seconds, over the last 4 years; 47:11.

Sunday Dec 30th, the last day of a 3 day running festival held in the middle of a woods in the Forest of Dean, was a day to celebrate for a bus full of Sarn Helen Runners as they travelled the distance to take part in a 7 mile trail race ‘The 7 Sins’. With 7 steep climbs and 2 large river crossings the race is variable and never dull. Running on the final day of races also added some mud and grime to the already challenging route. All this did nothing to wipe the smiles off our athletes faces however as they ran some great times and placed well. Two very sought after 7 sin T-shirts were earned by the first two Sarn men home as Simon Hall and youth member Dafydd Lloyd battled it out and ran in under the coveted one hour mark; Hall 3rd overall in 57:21 and Lloyd 4th overall in 57:24. Michael Davies and Carwyn Davies held a similar battle which resulted in Mike 1st M40 in 1:00:18 and Carwyn 2nd M40 in 1:00:38. Completing the M40podium Mark Rivers finished 3rd in 1:02:44 while Mitchell Readwin ran a great race and finished 8th in his class in 1:10:28. The only two Sarn Helen ladies in attendance certainly made their presence known as Dee Jolly ran a time of 1:01:41, not only winning the days ladies race but clocking the fastest female time of the whole weekend. Eleri Rivers placed 3rd lady on the day and 1st F40 in 1:11:27; Rivers also braved another race the next day where she placed 1st female in the Llandysul NYE 10k.

New Years Eve 2018 was another day of multiple races, a 10-mile hilly road affair in Llandielo and a 10k/5k hilly road affair in Llandysul, as well as a famous and fast 5k in Mountain Ash. The Amman Valley Runners New Years Eve 10miler drew a big crowd on 273 runners with the pre-entries selling out well before the event. Only Two Sarn Vests were on the start line with David Thomas pleased to be running a race close to home and the fierce Jane Holmes who is an advocate of new, brighter and bigger challenges. Thomas covered the 10miles on the road in 1:23:24 and Holmes crossed the finish line in 1:53:43.

The brand-new event in Llandysul, organised by John Mills and sponsored by JM running and J & P Home Improvements, also attracted some good numbers of fun runners, club runners and local supporters with both distances well attended. A not for profit event, all proceeds going to the community run leisure centre Calon Tysul, it was immensely successful and again the Sarn Helen team placed themselves well. In the 10k race Gareth Hodgson gave his ankle a test and wasn’t unhappy with his time of 41:37. Steffan Thomas ran a time of 45:00 with Eleri Rivers placing 1st female overall (the day after her 7mile trail race) in 48:28. Delyth Crimes ran herself into 2nd place with 50:49, Matthew Walker was next to finish in 53:46 closely followed by Enfys Needham Jones in 55:43. Finishing the year with a PB Nicola Williams ran 56:10 with Amy Edgell crossing the line in 61:12, Sandra Dabner in 62:18, Rebecca Doswell 66:59 and Emma Gray 75:48, all happy to celebrate a year of running accomplishments.

Nos Galan 5k is a famous race held along the streets of Mountain Ash each New Years Eve Evening and this year only one Sarn Helen family made the trip down the motorway. After a year of massive PB’s (5k, 10k, 10mile and HM) Gearge Eadon said farewell to 2018 with another cracking performance as he competed in the elite event and ran a great time of 19:27. It could however be said that Eadon was outshone by his 8 year old daughter Maddie, as she took part in the 600m childrens race; running a time of 2mins 33seconds she placed an amazing 26th overall (from a field of 112), was 5th girl to finish and won silver in her age class.