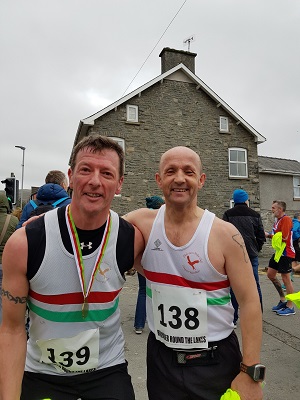 Just one week after the gruelling Tregaron Half Marathon Mitchell Readwin took on a challenging 10-mile road race in the village of Looe nr Cornwall. Held on Feb 23rd and organised by Looe Pioneers Running Club Readwin made the start line of the hilly, though be it scenic route for the second year running and finished in a time of 1:30:18. His eldest son, Christopher, competed in the children’s 1 mile event and gave a spectacular performance, finishing 8th out of nearly 100 runners.

On March 2nd two of Sarn Helen`s more experienced distance runners Michael Davies and Nigel Davies joined a field of more than 500 runners from across the UK in Rhayader to take on the inaugural Round the lakes 30KM race, formerly a 20 mile race which had been modified for safety reasons, the event now in its 35th year takes runners on a spectacular and scenic route around the reservoirs of the Elan Valley and traditionally forms part of an athletes Spring Marathon build up.

After a short circuit of the town the route took the runners on a three mile climb up to the head of the Elan Valley where they were greeted by a gale force head wind for the descent and following six miles adding to the challenge of an already tough event, returning on a scenic route taking in the reservoirs of the Elan Valley to the town centre finish in Rhayader where locals lined the streets to support the runners to the finish line.

Returning champion and Welshman Ian Williams running for Tipton Harriers was first to cross the line in an impressive 1:54:15 and in the ladies race Helen Oliver running for Cardiff club Les Croupiers was victorious in 2:21:24. Sarn Helen club mates Nigel Davies and Michael Davies enjoyed a very competitive race that eventually saw Nigel finish in 2:16:16 33rd overall and 9th in his V45 class followed just seconds later by Michael in 2:17:03 36th overall and a superb 3rd in his V50 class.

Caryl Wyn Davies had another outstanding, high ranking race when she attended Angeley Half Marathon on Sunday March the 3rd, an event set up by Always Aim High Events and that witnessed a field of over 1300 runners. Conditions were wet and windy and the course was certainly not flat. Davies placed a brilliant 8th female overall with a time of 1:31:44. Her husband, Gary Wyn Davies, who runs for Aberystwyth Running Club, also gave a great race and went home with some bling as he placed 3rd overall in a time of 1:15:50.

Ras Dewi Sant is a multi-distance event held from the famous welsh city of ST Davids and takes runners along the exciting coastal paths of Pembrokeshire. Held on Saturday March 2nd and organised by Man Up Uk, Sarn Helen had representatives in both the 10k and half marathon events. Sarn Helen also came away with four podium places. Steffan Thomas had to work hard and fight for his finish in the 10k event, worth while however as he won the race overall with a time of 44:54. Competing well despite sickness, Nicola Williams ran the 10k in a time of 1:12:49.

Husband and wife team, Mark and Eleri Rivers both took part in the half marathon event and both came away with some fantastic category positions. Mark ran a massive PB time and finished 6th overall in 1:35:41, placing 2nd Male 40. Mrs Rivers also ran a personal best time of 1:55:09 and placed 1st Female 45. Simon Hall was the first Sarn Helen to complete the 13.1-mile race with a great time of 1:34:29 and although not a PB, he placed higher than the previous year, 3rd overall in a field of over 200 competitors.

The triathlon/duathlon season is now underway and with it our Sarn Helen multi athletes are getting their bikes out of the sheds and their swim gear out of the drawers.

Sunday March 3rd in Neyland the Pembrokeshire Tri Clubs Duathlon took place with 79 competitors on the start line. The warm sun and lack of winds made for some great conditions and we had two members amongst the mix. With plenty of experience and as always, a strong bike leg, Eric Rees completed the run, bike, run in a total time of 1:20:50. Newer to the field but showing strong promise, Owen McConochie finished in 1:27:39.

The following week saw a staggering turn out of over 300 competitors take to the grounds and roads surrounding the National Botanic Gardens of Wales in the Wildflower Dualthon, organised by Toughrunneruk. With the bike leg cut short due to the ferocity of the winds the event certainly held up to its organisers name, conditions were tough! Two Sarn Helen Ironmen stood on the start line and seemed unhindered by the gales with some top age category performances. Kevin James placed 12th overall and a fantastic gold in the M45-M49 class in a combined time of 1:16:17. David Thomas placed 6th in the M55-M59 class with a time totalling 1:40:56.