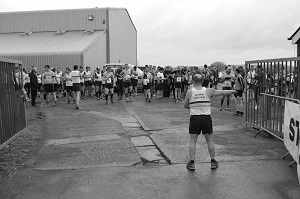 The winner of this years Ras Cors Caron Half Marathon hasn’t been seen along the windy rural roads of Tregaron since 2013, where he placed 3d overall in a respectable time of 1 hour 22. The Swansea athlete, 34-year-old Richard Copp, strolled across the line on Sunday 17th Feb in a massive course PB of 1:17:19 with a substantial lead on the runner up, Pembs Harrier Shaun Newbery, who placed 2nd Open Male in 1:18:41. Two-time previous race winner John Collier of West Coast Tri club completed the podium in a talent rich Open Male class with a time of 1:19:18.

The equally strong M40 category was topped by another course PB from Cardigan RC’s Mark Horsman in 1:20:26 followed by two Aber AC runners winning silver and bronze; David Dwyer in 1:21:034 and Mark Whitehead in 1:28:09.

Taking the Male 50 trophy home for the 2nd consecutive year is renowned TROTs runner Kevin Griffiths as he fought hard through to the finish in 1:26:11. Barely a breadth behind was Aber AC’s Patrick Finney who finished 2nd in 1:26:29; and a further 3 positions saw Sarn Helen’s Glyn Price in 3rd with 1:28:29.

A terrifically tough M60 class made for a good battle between the top three and only minutes separating them. Edward Davies of Maldwyn Harries placed 1st in 1:35:58, Mike Warrick of Rhayader AC placed 2nd in 1:39:04 and Rob Falconer of Swansea placed 3rd in 1:39:28.

The Under 21 male category was won by Sarn Helens Owen McConochie in 2:06:23.

The ever-growing event drew 125 competitors to the undulatingly quite lanes that surround the famous welsh village of Tregaron and this year saw a particularly large array of women runners on the start line. Conditions were not perfect, although perfect conditions are not really expected mid Feb in an off-season half marathon tester; this said some fast times were ran, despite the 5 miles of head winds.

Liz Tremlett of Carmarthen Harriers placed 1st lady overall and won the F35 class with a time of 1:38:48. Angharad Starr of Aberystwth AC ran a tremendous race, gained a massive course PB and placed 2nd overall, 2nd F35 in 1:38:25. Eleri Rivers of Sarn Helen ran with caution through a tender calf and placed a strong 3rd in the F35 class in 1:44:39.

Winning the F45 class was a lady now familiar to the route, Joanne Rees of Rhayader AC finished in 1:39:57. Gunvor Troelsen representing Builth and District RC placed 2nd in 1:55:41, oh so closely followed by Delyth Crimes, 1:55:40, of Sarn Helen, who placed 3rd.

From further afield it was worth the journey for Pontardawe RC athlete June Avery who won gold in the F55 class with a time of 1:59:56. Placing silver with a finishing time of 2:06:27 was Rose Thomas of Rhayader AC and June Bailey of Aberystwyth Running Club won bronze in 2:08:10.

Unaffiliated runner Fabi Findlay gave a great performance and won the Open female class in a time of 1:53:59. Yet another medal went to a strong Aberystwyth contingency as Theresa Shortland ran into 2nd with 1:57:04. Completing the Open lady podium was another blue Aber vest with Juliette Daun taking home 3rd with a time of 2:03:12.

As always, the race’s success is down to not only the competitors on the day but to all the organisers, volunteers and supporters, without whom the event wouldn’t even take place. The Ras Cors Caron team would like to thank all those involved, too many to mention, and are looking forward to a big birthday event in 2020.