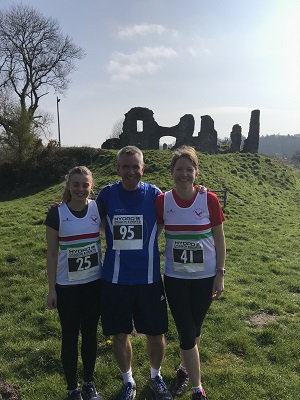 On Saturday 6th April 2019 122 runners tackled the challenging Sugar Loaf Fell Race over a distance of seven miles, with 1725 feet ascent. The snow had cleared from the grounds, and grey clouds cleared with sunny conditions for the runners.

On Saturday 13th April 2019, Delyth Crimes took on the challenge of the Mawddach Goldrush Trail Race in the picturesque Coed y Brenin forestry, an 8.5 mile trail race with 420m ascent. Delyth achieved 3rd in her category and 88th overall with a time of 1:28:07.

Meanwhile, Joanna Rosiak, running in Llanelli, achieved success at the Great Welsh Marathon (the oldest marathon in Wales!), coming 22nd in her category and 408th overall with a time of 4:41:44.

Racing on more than her own two feet, Sarn Helen runner, Rachel Stoddart continues to achieve success in Canicross competitions, involving running off-road with dogs attached by a harness and bungee line. Rachel’s recent achievements include the CTS Northumberland Marathon in February 2019, where she achieved a time of 6:36:38; the two-day Checkendon Challenge on 13th April 2019, placed 13th in her category with times of 23:16 and 23:18 respectively; and the Pendine Sands 10k Race on 14th April 2019, placed 5th with a time of 50:00.

With the race season in full swing, Sarn Helen Running Club is proud to report further achievements for April 2019, congratulating and thanking all competitors and supporters for their participation and encouragement.
Marathon runners have brought home outstanding results on 14th April 2019. David Thomas recorded a time of 4:13:32 in the Schneider Electric Marathon de Paris, coming 26,538th out of an enormous field of 47,486 international runners. The Paris Marathon started from the foot of the Arc de Triomphe, towards the Place de la Concorde, Rue de Rivoli, the Opéra Garnier, Place de la Bastille, Bois de Vincennes, with views of Notre Dame and the Eiffel Tower.

On the same day, closer to home, Carwyn Davies placed 6th in the OTT Trail Marathon with a time of 5:10:00. This trial marathon, with an elevation of 2773 feet was held in the Brecon Beacons, taking in Pen Y Fan from Graig Fan Ddu before heading up Fan Y Big, and over to Talybont Reservoir for the final climb up Tor y Foel.

On 28th April 2019, more than 40,000 participants took to the streets of London for the Virgin Money London Marathon. This year saw a world record number of 414,168 applicants for the event, and Sarn Helen was lucky enough to have three members taking part in this prestigious event. Nigel Davies recorded a time of 03:08:02, Jenny Caulkett finished with a time of 04:44:10, closely followed by Pamela Carter in 04:45:06.

On the same day, participating in the Tenovus 10k at the National Botanic Garden of Wales to raise money for cancer patients and their familes, Steffan Thomas recorded a time of 42:07, Nicola Williams crossed the line at 53:48, and Elisha Jones at 59:46.

In Canicross, Sarn Helen members, Marc Davies and Rachel Stoddart have added to their achievements with Davies placed 22nd with a time of 1:27:36 at the Goldrush Canicross; and Stoddart recording excellent times across three days whilst competing for the Wales team in the Canix Fur Nations event in Pembrey.