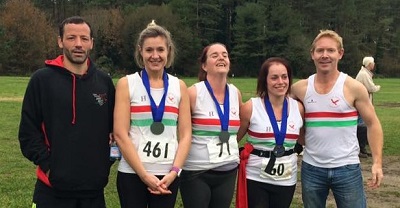 A large crowd of over 250 runners took to the scenic and sloping grounds of the National Botanic Gardens on October the 15th at a new event, The Royal Welsh Run. On the day there were two main events, a 5k and 10k, as well as numerous fun runs and children’s activities, raising money and awareness for the famous Builth Wells summer show. A spectacular performance and time, 20:23, from one of our juniors, Dafydd Lloyd, saw him place 6th overall in the 5km run and a massive 3 minutes in front of his father, long standing Sarn member Haydn Lloyd, who finished in 23:55.

In the 10km event Carwyn Davies was the first Sarn Helen to cross the finish line in 5th place overall. He covered the undulating and demanding course in 39:57 with veteran runner Graham Penn running a time of 1:00:20.

On the same day but nearly 200 miles away Martin Darby continued his race season at the Great Birmingham Run, a half marathon through the city centre and the 2nd largest event of that distance in the country. Just two weeks apart Darby knocked an impressive 3 minutes off his Cardiff Half marathon time as he finished in 1:57:21.

Even further away, on the same but sunny and very hot day in Spain, our very own marathon man David Thomas once again took to the tarmac in the Palma Marathon Mallorca. Coupling his holiday with a large event means that he can run in the sun and enjoy a cold beer afterwards, one he most certainly deserved as this year, despite the outrageous heat, Thomas covered the 26 miles in 4 hours 15.

Excited by the prospect of a new, although lengthened course, 8 Sarn Helen comrades took on the might and extraordinary climbs of Ron Skilton Half Marathon on Sunday Oct 22nd. The weather on the start line was pleasantly calm but the horrendous rain and winds of the previous days meant an abundance of mud, ditches and slippery fire roads. An unfortunate stumble before the race resulted in our only lady representative, Ron Skilton loving Nicola Davies, having to pull out at mile 6.

Some great times and category places were achieved by the remaining team. Simon Hall placed 3rd Open male, 4th overall, in 1:41:00 while Llewelyn Lloyd ran a time of 1:46:29. Our veterans ranked high with Calvin Williams 2nd M50 in 2:00:00 and Tony Hall 2nd M60 in 2:02:01. Huw Price ran the treacherous off road course for the first time and was pleased to finish in 2:05:23 while Mick Taylor revisited some of his favourite terrain and finished in 2:06:53. Back from his holiday and beginning to recover from his marathon David Thomas finished in 2:13:48.

Some top results have come from some top Sarn Helen ladies over the last few weeks, both on the road and off. On Sunday Oct 22nd our famous Vet60, Dawn Kenwright, attended Ras Dau Fryn in Tegfryn, Crymych, where some terrible wind and rain made the tricky technical, course yet more arduous. Kenwrights mud-spattered performance appeared unhindered however as she ran a time of 1:01:25, placing 12th overall and 3rd F35.

At the Age UK Leeds Abbey Dash, a flat, fast and very popular 10k held on November 9th, our long standing Open female member Caryl Wyn Davies ran a fantastic race amongst the near 9000 strong crowd. With a time of 31:26 Davies smashed her previous 10k PB by 45 seconds.

After a respectful 2 minutes silence on Sunday 12th November we had two attendees at the annual, long standing, off road ‘mud bath’ that is A Dam Good Race. Organised by Cardigan AC the route covers nearly 6miles along the slippery and sloping footpaths of Llys Y Fran dam, finishing up a vertically challenging 400 meter lane. Never one to miss the muddy trails, this year made harder by some warm and wet weather, Calvin Williams placed 2nd M50 in 46:30 while Mitchell Readwin tested his marathon legs after the hills of Marathon Eryri, running a massive 1 min course PB in 51:49.
Cool but calm conditions made for some great runs on Sunday November 19th at Sospan Road Runners 10mile multi terrain race which celebrates the trails, beach and paths within Pembrey Country Park. A popular event due to a thrilling course that includes adventurous slopes and terrain while still allowing for speed, Sarn Helen were proud to exhibit 7 runners on the start line.

Distance loving Nigel Davies had to retire from the event after being overcome by sickness at mile 3 but these sad circumstances meant he was a front line spectator, about to witness the first 3 athletes emerge from the trees and battling for places along the finishing straight. The spectacle included Les Croupiers Doug Nicholls, Sarn Helens Ken Caulkett and Carmarthen Harriers Jack Tremlett; all three in the same category and all three working spent legs hard to secure every second. The confrontation was over in a matter of 20 blinks, with Nicholls placing 1st, 1:00:55, Sarns Caulkett 2nd in 1:01:02 and Tremlett 3rd in 1:01:16.

During a true show of sportsmanship and dedication to his sport Sarn Helens triathlon king Gareth Hodgson has begun to recover from his escapade in Hawaii where events took a bad turn and results were effected by a case of bad circumstances. Having qualified for the Iron Man World Championships on one of the toughest Iron Man courses, Tenby, in 2016, the last 18 months have involved nothing but solid blocks of training for Hodgson and on arrival in Kona, Hawaii in early October his strong training continued along with his tan.

After 7,000 miles of travel Hodgson was pleased to acclimatise quickly and soon made training pals, including Burry Port man Philip Tucker. Just three days prior to the big event however, Hodgsons fate took a nasty turn as he was overcome with an exhausting and debilitating virus. Unable to eat and aching to the point of full bed rest it was with tremendous worry but steel resolve that Hodgson took to the start line on October 14th.

Although the result did not reflect his abilities Hodgson was content to finish, despite exhaustion, sickness and emotions hitting him hard from half way into the 2.4 mile swim. During the 112 mile bike circuit, usually Hodgsons strongest discipline, his speed began to decline along with his vigour; although all was not lost. A slight second wind during the 2nd half of the marathon, as well as the sight of his family eagerly spectating, pushed hard across the line to finish in a highly regarded time of 11:35:17. Meanwhile Burry Port’s Philip Tucker gave a celebrated performance, finishing in 10:07:53.