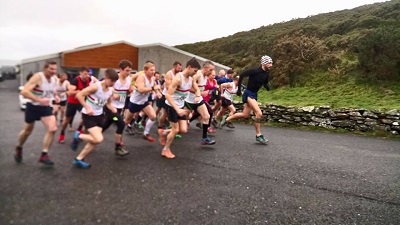 A proud and significant 25th Birthday for this years’ Ras Y Mast was held on Novemeber 26th with great thanks and much appreciation going to Bleanwern Holiday Centre, currently run by Mark Lamport and family. The centre willingly hosts and supports the event, year after year, despite the mud and inconvenience the event must cause; Over the past quarter century Sarn Helen has raised over £3500 for the centre which is used for respite and holidays for organisations and charities nationwide.

Weather was at its best for the time of year but under foot was another matter as the mild, damp and showery month had left mud at its deepest, stream beds at their slickest and the harsh mountain grasses at their highest. A 6 and a half mile route like no other offers a bit of everything as the route covers treacherous farm tracks, open moorland and on the way home a surprising fast half mile of road. Despite the bogs and competition from other big race events being held the same day it was a pleasure to see at total 63 competitors taking part with ages ranging from 4 years old to 67!

The primary school children covered a tough little circular route with a steep uphill start and finishing along the winding garden paths through the Holidays Centres collection of ponds, picturesque in the summer but slick and puddle filled in winter. The secondary school children cover the same path but their stamina is truly tested as their event incorporates a second, identical lap. All children ran brilliantly with the following results.

Secondary school girls- Alaw Jones 12:15, Cyan Mchardy 13:51, Gwenllian Llwyd Jones 14:10.
The adults race starts on the same steep climb and finishes around the same spectator filled paths but at its highest and half way point, Pencarreg mast, the runners have climbed over 1,000 feet before staring the boggy descent that points the way home. Race favourite and notorious mountain runner Felipe Jones made a 20 meter lead right from the start and by mile three only one contestant had managed to keep him insight, 2015 race winner and Jones’ training pal Dylan Lewis. But the gap was set and despite a mightily strong finish from both Sarn Helen runners the distance didn’t differ; Jones was first overall and 1st M40 in 43:18 and Lewis placed 2nd overall, 1st OM in 43:28. The remainder of the male category podiums looked as follows;

The female race was not so close at the finish but ever changing in the first half of the fight with renowned Carmarthen Harriers runner, Sharon Leech showing a spectacular show of speed during the first half mile and again up the winding and steep road that goes on to meet that infamous ‘Bank’. Sarn Helens Dee Jolly made the most of the downhill stretch at the half way point and from there was running scared in the hope of keeping the lead back on the road. A first time win at this event for local lady Dee Jolly saw her crossing the line in 51:22 placing 1st female overall and winning the OF class. Sharon Leech placed 2nd overall and won the F45 class in 53:02. Some great results from all the ladies followed with the remaining first three in each class listed below;

Silver in the F45 class went to the winner of the same class at the Aberystwyth 10k, Delyth Crimes of Sarn in 66:54.

Other great results from team Sarn Helen are as follows: