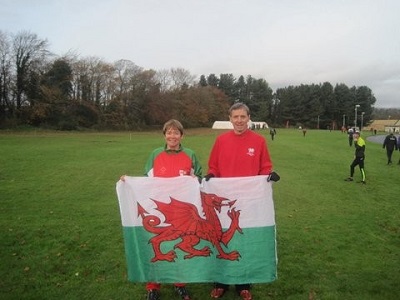 There is no bigger honour than representing you country and for our two legendary veterans, Dawn Kenwright and Richard Marks that accolade is one they have repeated time and again. This years’ British Cross Country Championships took place is the beautiful surroundings of Derry in Ireland on Saturday 18th Nov.

Both athletes covered a surprisingly flat but expectantly muddy 6km course with some great results. Although both veteran teams failed to place on the podium Richard Marks was 10th M65 in 25.59 while Kenwright ran 29:58 and placed 14th F60.

One of Sarn Helens mountain lovers took on a new challenge this winter by preparing then performing spectacularly at a 40+ mile ultra-event, all of road, over the Brecon Beacons and in wintery, challenging conditions.
The ‘Might Contain Nuts’ ultra challenge took place on Dec 2nd and has been a favourite of a few Sarn warriers over the years but the pace and positioning of Daniel Hooper at this years’ race puts him Sarn Helens king of the Beacons. His marching pace and steel preparation allowed him to cover the astonishing distance in 8 hours and 3 minutes finishing 6th overall; and at his first Ultra event!

The same day a total different race, over totally different terrain, but none the less painful due to speed and pace it demands, was being held on the bustling streets of Aberystwyth at the Cambrian News Aberystyth 10k. Sarn Helen had a great representation with some top class times, top time personal bests and tip top year end results.
Our ladies ran mentionably well with a staggering PB time from Caryl Wyn Davies as she placed 2nd overall in 41:18 and two category wins from Dawn Kenwright, 1st F60 in 46:05 and Delyth Crimes, 1st F50 in 49:45. Donna Davies and Rowena Greasley ran string times of 1:14:26 and 1:21:44 respectively.

Heading up our men’s team was Kenneth Caulkett who PB’d in an incredible time of 34:58, placing 6th overall. Michael Davies narrowly missed out on a category place as he finished 4th M40 in 39:15. Aled Sion Jones ended his racing year on a big high placing 2nd U20 in 39:42. Nigel Davies and George Eadon participated in a Spar of Speed, finishing ‘oh so close’ with veteran Davies running 41:11 (6th M40) and Eadon 41:13 (PB). Mitchell Readwin ran strong against the wind on the final mile stretch to claim a great time of 45:09 with Martin Darby topping his year with a solid 51:00.