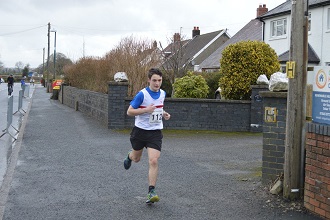 A day to cover all eventualities with fierce hail, subtle snow showers and a surprise visit from the sun could only mean one thing, that morning had dawned for the annual Ras Cors Caron Half Marathon! Held on Sunday February 11th from the old market town of Tregaron the event drew a great turn out of 131 runners ready to brave the elements; this said, special mention must go to those involved with the local rubgy club whom not only provide heart warming cowl but brave the icy cold for hours to marshell the event, and superbly i might add!

For many the event is a true test of fitness which signals the end to the difficult and gloomy winters training and the begiining of the longer evenings and a full race calender. For some the event is a challenge in itself with the first 8 miles bearing some steep hill and turbulent twists while the 3 mile straight of old railway line tests mental stamina and endurance. Whatever the reason for runners presenting at the start line the race is ever popular and enjoyed by all who take part.

A 2018 clear victory was had for the widely recognised West Coast Tri athlete, John Collier, as he took to the coarse for the third time and scored his second win at the event. Having ran a slightly faster time in 2015 and winning a highly contested battle against Aber AC's Gancho Slavov, Collier ran a lonely 2nd half with an outstanding result to place 1st overall and 1st Open male in 1:17:45. 2nd and 3rd in the Open male race was a closer call however between Aberystwyth AC's Owain Schiavone, Sarn Helen's Ken Cauklett and Cardigan Running Clubs Mark Horsman. Positions remained undecided 'till the finishing straight and resulted in Schiavone 2nd, 1:20:12, Cauklett 3rd, 1:20:28 and Horsman just missing out on a podium position with 1:20:37.

The ladies race was also won by an Open female in a class of her own. With a Half Marathon PB of 1:27 and a pace that sets her capable of sub 40 min 10k's Swansea Harrier Claire Bunce travelled to compete after a 12 hour night shift and no sleep. Not temperamental weather nor the lack of rest effected her outstanding performance as Bunce ran the fastest female time seen since legendary runner Ann Thomas placed 9th overall with 1:26 in 2013. Her time of 1:29:41 placed her 14th overall and is witness to her running near 6 mins 50 secs per mile for the whole 13.1 mile race.

2nd Open female went to Dee Jolly of Sarn Helen with a massive course best of 1:33:18 and 3rd went to team mate and another course PB runner in a time of 1:35:48, Caryl Wyn Davies. Davies also won the hotly contested shield for 1st local lady, a competition she has topped on many an occasion.

With all competitors showing great determination and some emotionally charged racing it was no surprise to see some top category times achieved by names both known and new to the circuit.

The Male 40 class was dominated by Aberystwyth Athletic club with first place going to their Balazs Pinter in 1:23:42 and 2nd to his team mate Patrick Finney in 1:30:17. 3rd place in a time of 1:31:£7 was unaffiliated runner Matt Blue.

The Under 21 field saw Aberystwyth University Harriers in 1st and 3rd, Ben Lee with 1:28:44 and Aled Skym in 1:41:40 with Aled Jones of Sarn Helen sandwiched between in a time of 1:32:54. Jones also won his first slot on the Local Male Shield, at only 17 years of age this will undoubtedly not be his last.

Always a highly competitive field, the M60 class at this event always brings out the best and toughest of runners. It was dominated this year by a Rhayader Running Club athlete, Mike Warrick, who ran strong to the end with a time of 1:35:58. Tony Hall and Murray Kisbee, both of Sarn Helen, placed 2nd and 3rd with 1:39:57 and 1:41:40 respectively.

The highest age group of the ladies, the F55 class was dominated by an old hand at the running game and a name both known and highly respected; Anita Worthing of Aber AC stormed through the finish in 1:45:48. Mari Elen Hobbs placed 2nd in 2:14:31 and Alison Terry of TROTs placed 3rd in 2:20:02.

Only 4 minutes separated the leader board of the F35 class. Joanne Rees of Rhayader Running Club was quickest in 1:36:51 with Louise Barker of Aberystwth AC 2nd in 1:37:29 and Angharad Starr of Caerphilly Runners 3rd in 1:41:17.

As the number of participants demonatrates the event is an undeniable success but one that would not be possible if it werent for those willing to help and support with time, effort and donations. As well as all assosiated with Tregaron Rugby Club the committe would like to thank Rob Cutter for Lead Car, Dilwyn Williams for Sweep car and Llanllyr for the water.