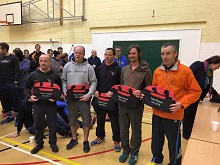 Sarn Helen has ended the usually dreary month of Feb on a particular high with some outstanding results in the cross country, on the roads and along the trails. A mentionable feat was the launch on of the new Llanerchaeron Parkrun on Feb 10th, a free weekly 5k timed event that is safe and suitable for the while family and was supported by Clwb Rhedeg Sarn Helen and runs in conjunction with the National Trust. A dedicated group of volunteers, many of whom are active members of Sarn Helen, are responsible for getting the event up and running and after only 3 weeks has seen near 200 walkers, joggers and runners take to the trails. For more information on how you could take part or volunteer please see the Llanerchaeron Parkrun website.

A big event in the Sarn Helen calender is the annual Team Pursuits race held in Crymych and organised by our close acquaintances, the Onlineraceresults team. Held on January 29th, this year we presented with 22 runners and made up five teams to take on the time trail based 6.5 mile route in the surprisingly fine conditions. Our second female team resulted in a collaboration with our neighbouring club, Aberystwyth AC and our combined performances placed one team 4th and the other 11th in the ladies competition. It was a sad day for our top men's team as our winning streak, which had lasted for over a decade, came to an end after some outstanding times run by the Sarn men were outdone by a dominating male team from West Coast Tri. Our two open male teams finished in 2nd place and 9th. A pleasing end to the day however saw the Sarn Helen Veterans team win their class in an exceptional 5th place overall and with a substantial lead over their category opponents. The winning 'old man's' team consisted of Mike Davies, Daniel Hooper, Glyn Price, Carwyn Davies and Mark Rivers. Sarns fastest member on the day was last years top runner and previous course record holder Sion Price, who ran a spectacular race and placed 2nd to WCT's  John Collier by only 3 seconds.

Tregaron Half Marathon was held on Feb 11th and Sarn Helen was, as always, well represented. The clubs members times and positions were as follows;

As if the grueling 13.1 miles along undulating counrty roads wasn't thrilling or challenging enough, one man, the Sarn Helen Ultra Distance enthusiast Cawyn Davies took on the Brecon to Cardiff Ultra. The event is organised by the Run, Walk and Crawl team and covers over 43 miles of roadside and trails, namely the famous river following Taffs trail. Having enjoyed the longer slower training runs and produced some great middle distance race times Davies felt well prepared and his performance on the day did not disappoint. With amazingly changeable weather Davies had hail storms, snow flurries, gusty winds and at times blinding sunshine to contest with but the enthusiastic support of his family and being the powerhouse he is he covered the distance, and a staggering total climb of over 2,300ft, in a moving time of 6 hours 36 mins and finished 24th overall.

Llanelli half marathon took place on Feb 18th and among the ever growing crowds we had two club representative on the start line. Conditions were described as 'good', the course was labeled as 'flat and fair' and when asked the runners described the event like every other flat and so potentially fast course... 'it started hard and got harder'. Sarn veteran Tony Hall continued to place his name up with the best in south wales as his time of 1:37:14 placed him 4th M60, just missing out on a podium place. Our female representative Emma Gray made a milestone in her London Marathon training as she crossed the line in 2:41:33.

The Sarn Helen vest could be seen much further a field in on 25th of Feb as Caryl Wyn Davies and Gareth Hodgson took on the Village Bakery Half Marathon up north in Wrexam whist the Readwin family took on a 10 miler and the chilrdens race down South in Looe, Cornwall.

Both Hodgseon and Davies raced well with times that represented the fast and flat, all road course as well as the training both athletes commit to their sport. Both athletes proved to be at the top of their game as Gareth Hodgson ran a time of 1:16:16 and placed 9th Senior Male while Caryl Wyn Davies ran a PB in 1:31:03 and placed 8th Senior Lady.

A pit stop on their way home from a family holiday saw a father and son team take on the climbs and small seaside roads of Looe, Cornwall, as Mitchell Readwin competed in the Looe Pioneers Running Club's 10 mile race and Christopher Readwin ran in the primary school event. With a spectacular finish Christopher placed 2nd boy overall and in a time of 1:27:50 Mitchell finished the main race which lived up to its title; 'Hillyish and Hellish'.

Across the winter months Sarn Helen has show some real promise and great results throughout the Cross Country season and at numerous events. Rhys Williams has represented our junior athletes in three of Gwent League Cross Country fixtures and scored his best place in October where the race was held around the scenic grounds of Llandaff Fields Cardiff. He fought a furiously tough finish to place 23rd amongst a competitive crowd of 90 boys in the Under 13's race.

Elen Page and Sue Jenkins have also competed in three of the Gwent League fixtures with both achieving their highest places in December at Pembray Country Park where Jenkins placed 230th overall and 6th F60 and Page finished in 208th overall and 23rd F40. In all three events the Sarn Helen Veterans have shows some real fighting spirit and in all three races only a few places have separated them. As a result of Jenkins's strong performances she has been selected to represent the whole of West Wales at a national level Cross Country event.

In November, at the Brecon Leisure Centre meet, Williams, Page and Jenkins were joined by Caryl Wyn Davies who raced well in the Senior woman's event, placing 43rd overall in a field of over 300.

A new face to the cross country scene proved to be one that wont be easily forgotten or underestimated as Sarn Helens Sion Price took part in the Welsh Cross Country Championships, held at Singleton Park on Saturday February 24th. The course was recorded as 10,000 meters but on the day came out short; still it was wet and slippery underfoot and although not technical the small bumps and climbs slowed things down somewhat. Competing against the best cross country runners that wales has to offer Price was overjoyed to place 12th overall at his first ever CC event. He finished 8th in the Open Male class and in front of some serious, British class athletes.