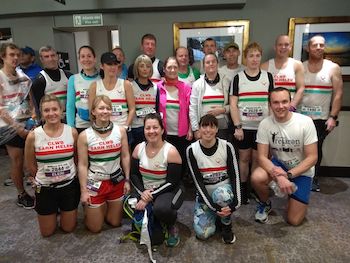 It continues to be a busy month for Sarn Helen Running Club.

On 29th September 2019, the Cheltenham Half Marathon took place, with 2,478 finishers having followed a course that starting and finishing at the Racecourse; providing glorious views of the surrounding Cotswolds before heading off along tree lined roads towards the stunning Town Centre, through iconic locations such as Montpellier and Lansdown. Sarn Helen Running Club’s Dawn Kenwright, in the FV60 category, achieved a fantastic time of 1:49:21.

The following day, the Ron Skilton Memorial half marathon race took place, starting in Llanwrtyd Wells. Carwyn Davies achieved an excellent 14th place overall in a strong field of 127, with a time of 1:53:47. The event, which follows a figure of eight course across challenging terrain, raises funds for Motor Neurone Disease in memory of the former Treasurer of Green Events.

Also on 21 October, Rachel Stoddart and her working cocker spaniel took on the challenge of Thoresby 10k canicross-style. In its fifth year, this autumnal trail run takes places in the beautiful grounds of Thoresby Park, north Nottinghamshire, running along old military roads, cleared tracks through ancient woodland and grassed paths around the country estate. Coming third in her age group, 11th in her group, and 22nd in a field of 63, they achieved a finishing time of 53:34.

In rainy and chilly conditions, the challenging 37th Snowdonia Marathon took place on Saturday 26th October 2019, starting from Nant Peris, followed by a steady climb to Pen y Pass. The event attracted runners from around the world, keen to achieve competitive finish times on what is considered one of the most testing terrains for a road marathon.
With a record number of entrants - over 3000 - and 2313 finishers, the route took in the descent through Bwlch Llanberis and Nant Gwynant; with a steep climb to Waunfawr, almost 380 metres above sea level with an ascent of over 200 metres within one mile, before the final descent, which included a slippery and rocky downhill section, to the finish line in Llanberis. This was the final year for normal entries, with a ballot system being introduced for the 2020 event.
Sarn Helen Running Club was superbly represented by a motivated group of runners, along with a fantastic support team to wave them off from the start line, and provide a warm welcome back to the finish line.